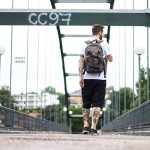 My name is David and I was born on the 2nd of July 1986 as the youngest of 3 kids in Stuttgart/Germany and I kind of feel like it’s time to tell a story:

Both my parents weren’t from Germany. My mother came from England and my father from Alto Adige (Italy) and so I was raised early with a feeling that the world was bigger than the little village and the footballclub where we grew up.

How big it really was my little mind couldn’t imagine at this time.

In my early years I already spent a lot of time drawing. I was more the sort of a quiet kid, a little insecure and when I had the laugh on my side it was mainly because I liked making a lot of jokes about myself. Maybe because I didn’t like making jokes about other people.

Usualy I had the feeling of belonging to a group and for me it was important that everybody liked me.

Once I started something new that I was into I tried my best to be good at it until I finished school and asked myself „what know?“

My life was never ruled by plans from me or my familiy and so I would’ve had every opportunity to do what I want in my life.

The problem was: At that time I had no clue of whatever that would be and so I decided to pick a choice wich 12 years later should painfully teach me the lesson that I might not fit into that kind of society that is expected and known as „normal“.

I became an Insurance Salesman.

The little, quiet, sesitive boy wich started his first day by painting the keyboard of his computer arrived in the suit-wearing-grown-up world surronded by people that begged for the 100% Insurance-All-over-Life-cover that never existed.

After I finished I refused to go to further educations because I always knew that in my heart I was no salesman even though I still didn’t know what to do instead.

At the time all kids owned their own money my parents decided to move to another country. My brother, my sister and me stayed in Germany.

The following months I went through the first bigger crises of my life.

For a long time this was the worst weekend of my life. On friday my parents left for good. On Saturday my former girlfriend left to live in London for 8 months and on monday I got a surgery for my knee. I can not really explain why I even left the village in this already difficult time to live in the anonymous city where I almost didn’t know anyone. Maybe I just felt that it was time to open new doors outside of my comfort area. Maybe I was just stupid at this time.

My company didn’t keep me after I finished my degree and so I sat around for 8-9 months with no work in a city where I didn’t have any friends. Often I stayed up until 8 o’clock in the morning just to oversleep the day because I still didn’t know what to do with my life and so I found myself in deep surrow and depression and when just one out of 15 invited friends of my old village showed up to my birthday I got drunk and in that night I sat on the windowceiling in the 4th floor. My arms where cut bleeding and I hoped for the strenght to jump or to just fall asleep and never wake up again.

In this time my sister became the best and most important person in my life and she will always be.

It took a while but I got back on my feet and because I still didn’t have any alternative I slid back into my old job even though I still didn’t like paragraphes and law-texts but I was good with the customers and they liked the way I communicated with them and so I started to like what I was doing.

„How was your holiday?“

By now I felt good in Stuttgart. I had nice friends and I earned good money but slowly the question started to grow inside me if there was more to this world that I’d seen by now and so I started to plan my first big trip:

4 months on my own in Southamerica – This time was maybe the first step wich 2 years later would bring my life to an end as I knew it in a mixture of tears and despair. I had opened myself to a world outside the imaginary box of safty. Bigger, friendlier and way better than my little brain could ever have imagined.

the most katastrophic year of my life in wich almost every buttress got burst started with my work becoming slowly more stressful. My phone didn’t keep still anymore. Once I finished one call I had to pick up the next one and so in summer I spoke to my boss for the first time. Back then I thought a long weekend at my parents house and a 2 weeks vacation in Italy would do the job and recharge the batteries. But I couldn’t deal with it and my working ideology forbid me to work more slowly because work that was there had to be done.

Month after month I tried to keep everythihng in line with the little left energy that I had for my work, my friends and my girlfriend who aswell had a hard time.

I woke up hungover in a little village in the middle of the Black Forrest where a party was going on last night. I slept at a friends house in the cellar with no lights and no mobile signal.

When I went out I recognized my phone blinking – missed calls of my sister.

I called her back and I heard her crying, sobbing voice on the other side of the line:

The following weeks I found myself in a mixture of stress and despair. Not knowing what was going on I tried to get trough one day after the other. I thought I would be okay again once I came back into my usual working flow but I never returned to that and so everything went worse. No one cared about my problems. Everything I said and did about trying to fix my daily work went wrong and one day I sat in the corner of my office crying and sobbing after I realized that nothing and no one will ever change.

At this time I broke up with my girlfriend because we couldn’t find the strenght for eachother anymore. This was the worst part of all but at this point sadly neccesary.

Then I left work sickend and weakend of all.

Months passed and I couldn’t understand what actually happened and so I spent night after night on my own drawing, writing, practicing Calligraphy. My doctor imidiatly wanted me to take antidepressants wich I refused to and so I had a lot of time thinking about everything sober and one day I made a decission.

I was a lot more afraid about getting back to my usual circle of working, sleeping, holiday than I was about the other side of the world wich I met already two years before and so I decided to go travelling again. Only this time without a flight back, no contract that’s waiting and no safety because safety is an illusion.

First stop ist Colombia in wich I fell in love the first time. From then everything ist open. Nothing is planned and I’m excited about what is going to come.

„I just didn’t understand why my brain wasn’t working the way it’s sopposed to anymore.

And then one day I thought, „Maybe it was never ment to work that way.““

Thank you for reading until now. It shows me that at least some people are interested. If you like to support me even though you might have never met me you have the chance to do by pressing the donate-button.

If you decided to do so I ask you kindly to keep it small.

Thank you very much