…When I was writing this metaphor for the first time I was thinking my life had been extremely dramatic.
Almost burned out from work. One of my closest friends had committed suicide. Breakup. Everything seemed to be fucked up.

Today, exact one year after leaving Germany I know that:
1. My life hasn’t been more of a struggle than many other people’s and
2. it’s these moments that build your character. These moments in which you can decide to hold on to the Status Quo or make the best out of the situation by changing something entirely.

But to understand all of that I had to leave my comfort zone for a while and get rid of a lot of fears, doubts and memories of many bad experiences.
Besides that I also had to move away from 12 years in a wheel with almost no chance to find my own true path.

“I can not understand why you are throwing away a safe job”
I heard this sentence a while ago at a meeting with old classmates and I still sometimes have to think about it.

Maybe because it never was safe, I was just told it was a long time ago.
As well at the age of 20 I already got prepared that my pension one day will be too low to survive. So a lot of fear was planted in my heart before I even really had hit the working world.
But spending 38 hours a week on a company for decades just to pay the running costs didn’t seem very safe to me anymore at one point.
Especially when you have to fulfill other peoples orders and these people are in charge whether you are still going to work in the same position the next day.
How is that safe?

When we were children we were told that we could be whatever we want to be but the older we got a lot of us started to limit themselves:
By financing. Wealth. Comfort and the hope that one day the right moment will come with the right idea and then everything else will work out and we live happily ever after.

But:
The right moment will never come as long as you wait for it. The only right moment to do something is now. Every second of the day. Every day of the year.
As well the right idea is not like winning the lottery in an instance. Once you found it it’s hard work and a lot of time to bring it to perfection.
A lot of failure. A lot of loosing. A lot of learning but then again there are suddenly infinite opportunities of winning whatever we want our life to be like.
Nobody should have the right to judge your path because in the end you will be the only one facing your own death while asking yourself if you really tried to get most out of it for yourself.
Or if you always just wanted to please other people’s desires.

To really understand all that I had to go back to the beginning first.
Become a child again and throw off all the anxieties that our grown up lives is filled with.
Start walking again.
Start falling again.
Recognizing that it is a lot easier to learn from every failure than I thought.
I started to question everything that is considered as “normal”.
(“Normal is just another word for lifeless” – Shah Rukh Khan).
My wishes and desires became the center of my process. No distractions. Only me.
And it was wonderful.
To trust my instincts and realizing that I am the only one responsible to know what is best for me.

9 months it took in Colombia to build up enough self confidence to apply for a painting job that was bigger than anything I had done so far. Only 3 weeks time to paint the largest community room in a hostel that I have ever seen at the Drop Bear Hostel in Santa Marta.
The last project in my comfort zone Colombia before I had a flight to the for me unknown country of Nicaragua. 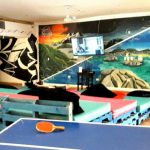 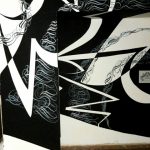 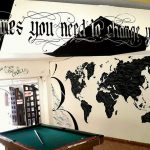 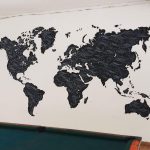 At the beginning of these 3 weeks there were no more doubts that it’s going to be good. All I had to learn I did by researching and trying during these 3 weeks.
Now that it is finished I can admit that this was actually only the second mural I had ever done with acrylic paint on a wall.
(Number one was Calvin and Hobbes).
So there was really a lot to learn 😉

A couple of weeks before I started painting the Drop Bear Hostel I had booked the flight to Nicaragua. Leaving my beloved and safe environment of Colombia. The contacts. The friends.
Swapping everything for the complete unknown and the challenge to find something to work in a country I didn’t know anybody at all.

The first two weeks my sister and a close friend from back home visited me.
But after they had left the downside of traveling on your own hit me hard.
True loneliness.
It was rainy season and most of the hostels were empty. The places I stayed wanted to rather earn the little bit of money they could get out of me being a paying customer than having me working for them.
It felt like the little money that I had left ran trough my fingers while I wasn’t able to do anything about it at all.
Everyday I left the hostel to print businesscards. I walked into bars and restaurants talking to the people. Offering my work.
Being an introverted person that was a really tough challenge.
I sent messages to hotels and designed little frame-boards to show around.
I just kept on moving so I didn’t feel like sitting around waiting for change to happen.
But nothing worked out and with each day I felt worse.

My closest friend at that time was the guard of my hostel working nightshifts. He gave me the advice to send a message to a place called Chureca Chic.
What I didn’t know was that Chureca Chic is a non profit organization that helps women out of poor areas around Managua.
They sell handmade crafts in a little boutique in order to finance classes for the women.
Classes of art. School. Yoga. Meditation. A lot of things that helped me as well to find my inner peace again while traveling.
What I also didn’t know was that the boutique was only 2 streets away from my hostel and so one day on my way to the supermarket I passed it and thought.
“Holy sh… What should I do? Go home and change my colourful shorts into something more fancy black? Get my longsleeve to cover the tattoos?”
Instead I decided to seize the moment and stepped into a little boutique wearing really colourful shorts and a tanktop to introduce myself as an artist.

I didn’t earn money. “Only” a lot of experience and new friendly people and so I was happy to leave the hostel every day in the morning to paint a mural for the place with the topic “the secret garden”. 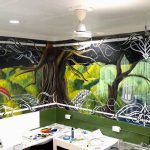 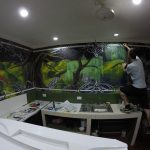 Between the hostel and the boutique there is a bar called “Time Traveller”. I was already told that the owner might be interested in my work by a couple of people. But I never found the time to go there and as well I wanted to finish my first mural in Nicaragua before meeting him.
I wanted to show him all of my skills.
So when I finished I stepped into the bar and met his girlfriend. She promised me to speak to him and only a couple of days later I had my own (not so little) room in the bar and started painting the “Time Machine”-wall.
Besides that I spent 3 wonderful weeks with Kike and Carolina and the whole bar staff + family and friends. 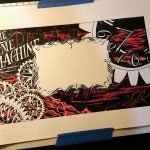 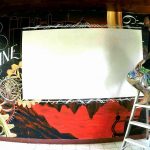 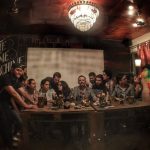 About a week ago I went to a meeting organized through a social media platform called “Internations” – Another recommendation from the hostel worker (Thank you Sam).
My profile included 2 signs from Colombia I made.

And so, only a few minutes after the meeting had started, an Italian guy came up to me asking if I was the artist painting the signs.

A few days later he picked me up to go to Popoyo to paint some of the signs he needed for his new hotel at the beach.
Meanwhile I had asked my friend in Colombia how the signs are working out during dry- and rainy season.
He assured me that all was good and so I am sitting at the beach now enjoying the good food and doing something that I really enjoy. 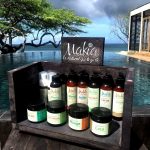 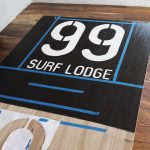 Nevertheless I decided to go back to Germany at the beginning of next year. I am going to move to Munich where my girlfriend lives. The first contacts are already made. The preparations are running and I am looking forward to every step and every challenge that my new future will bring.

Broken Pencils Pave My Way – A sentence I wrote after I was told that my life was not only about my wishes.
When I sat in the corner of my office crying not wanting to talk to anybody anymore and locking myself away for days.
When all I did was asking for a little change.

Today the only thing I am able to say is “thank you”.

Thank you very much that the little bit of change I asked for wasn’t granted. That I was forced to change everything myself.
From the bottom of my heart.