“if I am good in a job that I haven’t got a passion for then I wonder what would happen if I do something I really enjoy!”
Some thought I had years before

Exact one year ago I decided to sell all my stuff back home in Stuttgart/ Germany (The Facebook – Call for my fleamarket was on the 25th of April 2016).
It was the decision to quit my whole life as it was and change it into something complete new, not even knowing what this is going to be like.
Even though I didn’t know what to expect I found myself in a motivation boost I’ve never experienced before in my life and so there was no doubt for me that things will work out.

Structures that were made by other people got me stuck in a false thinking of safety for years. Keeping my mind in a golden cave filled with cotton and therefore not able to extract its whole possibilities.
A working contract was my choice of independence for several years not recognizing that it made me even more depending on the money that I earned to be able to pay the bills that I had to.
And so I spent hours and hours of my precious time fullfilling other peoples wishes.
Even tattooing which could have been my theoretical chance of a lifetime didn’t make me feel happy at that time. Even though I’m very thankful for the time at the studio and maybe at one different point of my life I will return to the tattoo gun. But not now.

I’m looking at an interception and there is only one way to go – mine!

If you look at the decision to come to Colombia there wasn’t a lot of adventure about it. I knew where I was going. I knew people to visit. I knew the culture. The city I’ve arrived in. Even the airport and a bit of the language.
And I had enough money to not need to worry for a while.
Only 2 weeks after I’ve left Germany I found myself in a new comfortzone built up by a good friend I met in Ecuador 4 years ago. It gave me space and time in the peaceful jungle to develop at a calm speed. That took a lot of time but was necessary for me and my needs at that time.
To explore where my mind wanted to go. To explore where my creativity wanted to go (“La Fuente es en mi” – “The Source is in me” A quote from Ryan, one of the volunteers I was working with at the La Fuente B&B”).
No influence! No pressure!
Thank you. 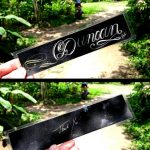 (a bookmark that I made as a gift)

After 4 months I still hadn’t spend a lot of money and so I kept myself again in a safe structure as I recognized.
There wouldn’t have been any problems in even earning a little money at that place as I was offered dozens of opportunities in tattooing travelers or just selling my artwork. But I didn’t feel like it and so I kept myself calm and quiet drawing for my own. Giving away gifts to travelers and volunteers not wanting to earn any money. Just to practice and gain experiences. See how people react to my art. See what I could maybe offer one day I decide to sell things.

After I spent a couple of weeks back home in Germany in December I started to spend more money on things that I liked doing. I visited friends and family and of course spent a lot of time with my girlfriend who (and that is the best thing that could have happen to me) decided to have a relationship even though I was already on another continent.
She was also already here for a 4 weeks visit in March 🙂

The change of priorities in spending money helped me develop even faster. I felt better and better again and started to not only build up confidence with my work again but actually with my social skills as well. What in some way is just as important as the work itself.
Especially at the beginning when nobody knows you and you want to be recognized. 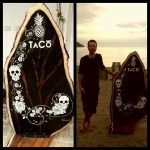 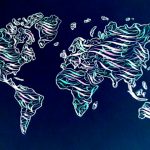 (left: a sign that I made in Taganga/Colombia on the right: playing around with pictures. I just have to figure out what to do with it)

Nevertheless. There are always some downsides to the sunny side in life. And as I’m a human being like every other person on this planet I am no exception even though you see me smiling from pictures at the beach at the moment.
I always wanted to write an essay about the lie behind social media profiles and why to me it is so important to share all my feelings but I never really found the right words and now is not the right time.
But just let me tell you something you might already know: There is a story behind every picture you see on social media. And it’s sad but often the most perfect profiles come from the saddest and loneliest people.

17th of April 2017
Everything was shit. Things weren’t going as I wanted them to and the only people I wanted to communicate with about that were back home and so I talked to friends, family and my girlfriend about how unfair the world is… I victimized myself at a high level blaming the entire world for me being in a bad mood.
A few hours sleep later I thought about my arguments again and started to research them on the internet. Communicate with people and I started to learn a lot. Especially about me. Only minutes after that I felt stupid and helpless for blaming an entire world for something that only built up in my little unimportant system and I decided to take a 24 hour break from the internet and switched of my phone.
Then I started to write down my feelings and a lot of questions until 4 AM the following morning:
Why do I react so strict to myself and other people sometimes?
Why do I don’t like when people depend on me?
Why always my understatement?
Why do I always think everyone is manipulating me and other people?
(the funny fact about that is that it really happens 24/7 – everything and everyone influences you. The way someone talks. The way he or she is dressed. The smile. But there are people that don’t use it as a power and there are people that do – and there is no shame about it but I always have the feeling people use it in a bad way trying to get only their own interests covered not thinking about others. And that is a big problem for me because it really pisses me off sometimes for no reason. Especially when it comes to moral questions)

So: Why exactly do I care and what do these feelings do to me in the end?
And I found some interesting and fascinating answers and most of them had to do with a lot of fear.

In the same night I decided the time of experimenting is over and I booked a one way ticket to Nicaragua. My sister and a good friend are going to be there for 2 weeks and I took it as a goal to be there as well.
But why “one way”? Because I never thought I would stay in one place that long and it was the perfect moment to get moving.
I had built up confidence. I had spend money. I had a folder with my artwork and I felt good enough to see the world.
And I found a concept. So now it’s upon me to figure out if it’s a good one 🙂 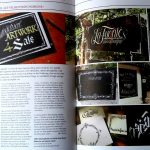 So the real journey begins again with my sister accompanying me. I’m really looking forward to that even though I panicked again a little at the beginning but that’s just what happens!
“This is not the first rodeo I’ve been to” Jay used to say at La Fuente.

And I’m also exited that my brother is planning on coming for a visit.

2 thoughts on “Chapter 8: The journey continues”