on the night before I flew a little group of people decided to have one last beer with me at my sisters place. We sat in the kitchen and I got a little book with photos of friends.

Silence. Open a beer. Lighten up the cigarette. Hide the emotion – thank you!

The moment my sister hugged me and said “see you tomorrow in Colombia” was probably the beginning of my journey. After that I sat in my brothers car who gave me a lift home.

The last day was of course combined with a lot of stress. There was still a lot to do. Bring away books. I still had a box of ink I wanted to give away.

Checking the last few points of the homepage.

I came home. Nobody was there. I lay down. Couldn’t sleep… waiting

Lars comes home. Get up. Talk. Lay down. Wait. Melancholia. Nostalgic feeling. Inner Peace. Silence. Night. Darkness. All at once.

Alarm clock ringing at 2 am

On the third day of the Mini-Rock-Festival I stood at the bar mixing cocktails. Two days of partying. Two days of drinking alcohol and only one last one to come. One last party with a lot of the friends that I love.

The fact that another person had crept secretly into my heart in the meanwhile only increased the bitter sweat melancholia that surrounded me.

End of the shift. Go Partying. Have a lot of loving people around you.

Feeling totally calm I get into the Taxi. Lars accompanies me to the airport with two beer in his bag – thank you!

If you wonder about the connection? I know there are flights with less stops but while booking I only thought “Fuck it, it’s better than waiting for hours at one single airport for a connecting flight.”

While I had already flown via Palma de Mallorca to Madrid (of course surrounded by party tourists and the hymne “malle ist nur einmal im Jaaaaahr” which can be ruffly translated as “Mallorca only happens once in a year”), my sister just entered her first plane from Stuttgart to Atlanta.

Her first message that day was that she might not catch her connecting flight in Atlanta because her flight was two hours late.

My answer from Madrid: “Catch me if you can” and loads of laughing smileys.

Finally I entered Colombia. Immigration? No problem. Nobody checked on the flight I booked to Panama just to make sure.

The same airport as three years ago. The same bus, the same seat next to the driver which I had to climb to because again, I was the last passenger and all the other seats were taken.

The same route, the same feeling, the same inner calmness – despite the fact that I -again- ran straight into a dangerous district packed with all my luggage.

Three hours after my arrival in the hostel I was on the road again to collect my sister from the airport at 11:50 pm with two cans of beer.

I woke up in the hostel dorm and it was there: the fear of having made the mistake of my life. The fear of having left behind exactly what could have perhaps made me happy at last, even though nothing ever was able to make me happy for long in the last 30 years (conditionals are asholes).

Fear is normal. Especially during the first days. All possible alternatives come smashing in your face. Knocking you out. Keep you stuck in bed. Every decsision. Every person that isn’t stuck in your head but thinks to know what’s best for you by giving you logical reasons to not go.

The only reason I have is that I don’t want to look in the mirror one day. Tighten my tie and look in my eyes thinking “why didn’t you just go when you had the chance?”

Just half an hour later when everyone in the dorm was awake and I suddenly stood in front of a polish girl who had been travelling for several years and a Phillipino agreed to take us on a a city trip with a guy from Chile, my whole fear had vanished.

Welcome to Medellin by daylight – breathtaking!

This city just shines in a way that charmed me from the first day three years ago. Here I had met a handfull of people that I still have contact to. 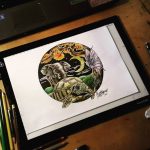 (present for a friend I met in Medellin)

Here getting wasted had been predicted. Here I had become aware of that the people in Coumbia were also just simply people who just had another culture, another history and well, getting offered cocain at every corner is just one part of this history. Your choice to take or refuse it.

We’ll be back to Medellin in a month and will spend the last days of my sister’s holidays there.

A murderous bus ride. Arriving to Salento in the evening. A jeep brings us to our hostel, which lies a little outside of the very tourist village. A little outsides includes a lovely familiar atmosphere and no internet. Very nice.

Not to forget the 3 Dogs (Rasta and Joint were 2 of their names) and the horse that always stuck his head into the outdoor-kitchen when someone was inside.

Unfortunately thanks to the chaos in my head I managed to reserve our beds for the wrong day. But no problem because the hostel owner decided to build us a little mattress corner where other backpackers were sleeping in hammocks. Our thousand “muchas gracias” were responded by the same amount of “de nadas”. 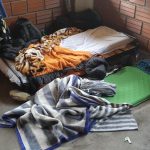 The day after we were only relaxing and when I saw a girl from the staff drawing outside in the green I offered her to show her how a mandala is drawn. After that she asked me if I’d like to make her one as a present. In this atmosphere I of course couldn’t refuse. 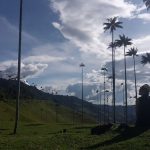 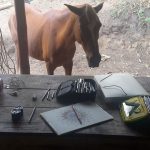 Salento is beautiful. The big palms are in Cocora. Only about 20-25 minutes from Salento by jeep. But our primer idea of going to Salento was to join an Ayahuasca ceremony and thanks to the hostel owner we got contact to one which we joined two nights later.

It was very nice. Loads of local people came together and there were only a handful of foreigners. And so the concentration of the drink itself was also very soft. That was some hard contrast to one of my last experiences in near Cousco where I joined a ceremony which was visited by only travellers and the hole thing was just too intense that at some point I had the feeling it would drive me over the edge of sanity. 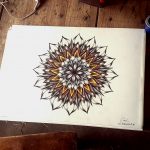 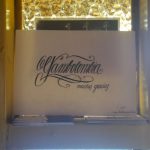 PS: Just in case that anything happens to me on one of the murderous bus trips, in any city or elsewhere I want to make clear that I’m absolutely conscious about the dangers that travels like this bring with them but going not would have been my emotional death, many many years before the well deserved retirement everyone is longing for.