…or a journey from a stressful city to peace and quiet.

After about 7-8 hours on the bus we arrive in Bogotá. The bus-terminal is small and crowded with people waiting for a taxi. We ask a police man if there is any other possibility to get into the city but there isn’t.
So we wait and try to figure out the wifi-passwords of the passing buses. At one time we are lucky and send a few messages home.

The taxi brings us to “la candelaria” the center at the foot of Monserate. A church on a mountain with a mindblowing view over this chaotic gigantic city.
We have no hostel booked and so we just enjoy the first impressions of this wonderful city that Does (love letters) once called “the disneyland of streetart” (according to a local artist I talked to 3 years ago).

Hostel found. Check In at 2 PM so we leave our stuff and go straight to Monserate.
The path is closed so we have to take the gondola what is sad in 2 ways. First of course we have to pay money to get up and secondly I had tagged a wall there three years ago with greetings to Stuttgart. I’m quite sure that it’s not there any more but I would have loved to check.
Maybe some other time. 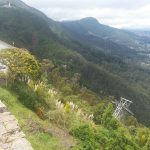 It’s still Tuesday and after a nap in the hostel some local guy asks us if we want to join the “Gringo’s Tuesday” at night.
We don’t have other plans and there will be some guys from the hostel as well and so we decide to join. Connecting to people and have some fun partying.

Some thoughts about the “Gringo’s Tuesday”

10:30 PM – the bus is late. Some people are waiting at the hostel reception including us. At the time the bus arrives everyone gets on with one or two beers. I sitting at the window while the first glass of rum is served.
The bus departs into the darkness of the city. Yellow shining street lamps give it a dirty looking gloom while we pass poverty and homeless people.
With an almost lethargic stare I recognize the almost paradox change into suit-wearing party-people standing in front of classy bars. I’m starting to feel uncomfortable.
The bus driver plays salsa-music out of bad speakers. People are laughing. People are drinking. People are having a good time.
The party itself is okay but for me very boring.
I see the usual picking up moves. The same all over the world. Nothing special.
“You have to make an effort” a Dutch guy once told me when I said I sometimes am not able to connect with people.
Most of the time I don’t want to.
At 3 AM the bus takes us back to the hostel.

2 more days we stay in the capital. Going from one side to the other by public transport. Joining a graffiti-tour and listening to the stories behind the pictures. Most of them political statements against a corrupt and aggressive system that treats the indigenous culture like shit.
Another story is about a 16 year old kid that was shot by the police while doing a graffiti at night. The whole street art scene went crazy and all of Bogotá was painted with pieces of loyalty.
All of the police-department claimed that the kid had carried a weapon but years later some of them had to go to jail as it was proved as a lie.
Since then Graffiti in Bogotá is not really legal. But you can’t get a criminal record for doing it.
The gates are opened for some of the best street artists in the world.

We go to Barbosa. A little town where a friend of mine lives with her 4 year old daughter.
I met her 3 years ago on a gay and lesbian party in Bogotá.
A little pink haired girl full of energy that at one point confessed that she at first sight was certain that I have to be gay.

I’m okay with being told that I seem gay to some people sometimes. To be honest. I don’t really care. Maybe I was never 100% straight. I like people with personalities. I like people that have a loving character so maybe you could just call me bi-emotional, pan-emotional or just open to the world.
I’ve seen enough “shades of grey” in between all kind of stamps that people like to put on themselves to not bother about giving me one.
#lovinghumans

My sister and I arrive at the terminal in the evening and we have no clue where this girl lives. It’s dark and even though for a short period of time we have wifi we cannot connect with her.
The friendly people at the terminal ask us if they are able to help us. Barbosa is a small non touristic town so we are the only foreigners there.
A guy asks me if I have a number to call. I show him my saved contact and he looks at me asking:
“Naidu? You are looking for Naidu? I know her. I can bring you to her place”

5 Minutes later we see Naidu working in her restaurant. A lot of hugging. A lot of drinking and about 7 to 8 hours later I stand on a mountain in the dark looking down on the lights of a nice little town with very nice people.

Monday, the 22nd of August

we have still one more planned stop until we are free to go where ever we want. Minca, a little Jungle-Village near Santa Marta about 40 minutes away from the Caribbean coast.
I met a guy called Duncan 3 years in Ecuador and spent a lot of time with him in hostels only talking, smoking cigarettes, having some beers.
This guy now runs a survival tour business in Minca.

3 years after we said goodbye to each other we stand face to face. The first hug. The first laugh followed by the words “this is not a non beer time”.
On the first night he offers us to join him and 2 other friends into the jungle for an exploring weekend.
Of course we said yes.

The place is beautiful and so chilled that we instantly decide to stay for a bit longer than at the other places. It’s small and familiar. The staff is caring and more like a family. All the people we met staying said that they really enjoyed sitting around a bar with a handful of people. Having dinner together in the candle light because sometimes the power went of. Having no wifi at all and the next possibility to get it is a 45 minutes work down to town. 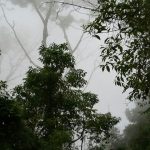 Another one and a half hours walk up the mountain there is another hostel with a huge hammock. A nice place with good food. But as we presume it must be a highly recommended place including a lot of young hip travellers and so we enjoy the view and wonder of again.
In the evening we are happy to be back at our little wooden bar. 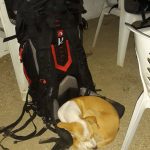 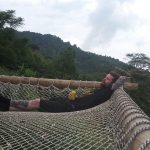 Friday, the 2nd of September

I’m still sitting in Minca. One and a half weeks of relaxing. Tomorrow our flight goes back to Medellin from where my sister will leave to Germany on Monday.
But what actually happened in these 12 days we stayed here?
It seems like an eternity and on the other hand just past so fast.

We had a wonderful time getting to know new people. Many conversations. Exotic animals. A lot of beer and a feeling of coming home every time we sat together with the staff.

2 hours from there (Tayrona national park)
Carribean-Beach, Carribean-Iguanas, Carribean-normal-sized-hammocks, Carrabean-staff-members that where also unbelievable helpful by lending my sister the shoes that she definitely needed to hike. Sun, sun, sun…

All inclusive, just how I would call it. 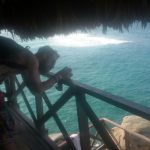 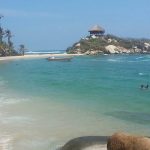 In about one or two weeks I will return to maybe paint the hostel wall. I’m looking forward seeing the people again.

3 thoughts on “Chapter 4: from Bogotá to Minca”