When I came to Colombia I was an inconstant, melancholic, egoistic shadow of my former self. I was told that I had changed a lot (in parts positive / in parts negative) and I affirm that with no doubt.

Most people felt happy for me and wished me the best telling me it was the right decision to leave.
Some didn’t and I was told I was weak taking everything personal and emotional.

Some people questioned my intention and told me I had the wrong motivation for this travel. Some gave me advice by telling me not to expect too much because I might be disappointed.

Once I was told I’d run away and in the same sentence I was told that this won’t change anything:
I agree. Running away doesn’t change anything and if there is one thing you can’t run away from then it’s emotions. Everyone that stepped out of his country for more than a 3 weeks holiday should know that.
Running away was never one of my intentions. My alternative would have been to getting doped back into work by taking medication without any chance of actually process what happened.
That shouldn’t have been an option because at that time neither my mind nor my body was able to deal with this.
An Australian friend I worked with the last couple of weeks was able to choose the right words when he told me something:
“you are not running away from anything. You are running towards something new without even knowing what it will be. That is strong”

Change will always bear the risk to remove oneself from others. Especially because no one in the world is able to live through your story except for yourself. You can talk and talk and talk but the only thing you can hope for is understanding. Your counterpart will never see the whole picture inside you. Only a surface that you present. No one can feel your feelings and think your thoughts and that makes you the only responsible person for every decision you ever made and will make.

Like in no other year before in 2016 I started to understand and the moment I decided to fly was the moment when I began to feel happy again.
And that proved it as the one and only right decision that I could have made.

Happily on the other hand change can also lead to meet new and old friends you didn’t think about before and this will be the bridge to a story that started 3 years ago:

After one and a half months in Colombia I managed to leave this wonderful country and after a 28 hour bus-ride I arrived in Quito on time for the champions-league-final Bayern Munich VS. Borussia Dortmund.
Upon others I met a guy called Duncan at the hostel. He was living for a while in the north of Colombia but now he wanted to see some other parts in Southamerica. 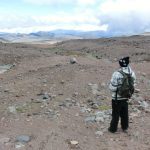 2 complete different characters started to connect.
One extroverted, louder, the alpha-wolf.
The other introverted, quiet, holding back.
Besides as well 2 different stories to tell in hours and hours of conversations while we were traveling around Ecuador together for the following 3 weeks until I crossed the border to Peru and Duncan stayed back to return to Colombia some time after.

A few short words about Duncan

Already in his early childhood Duncan (originally from Northhampton/ UK) used to stroll trough the woods with homemade utilities he used to survive in the wilderness.
What started as a game became a passion and after we said goodbye in Ecuador he returned sometime later back to Colombia.
There he used to hike into the jungle on his own. Just to get away from everything and to return back to civilization a few days later.
When the first tourists noticed him being away and what he was doing he started to take some of them with him. Later on he discovered that people were willing to pay for this kind of adventure and so he decided to build up a survival school.
DC Bushcraft and Survival was born.

At first he rented a little place near Minca in the Sierra Nevada de Santa Marta where he stored his gear and held his classes.

Later he built a Bed & Breakfast together with his former girlfriend with the name “La Fuente” (the source). This place had and has a big importance to my story as you will find out reading further on.

3 years after we saw ourselves for the last time we cheers with a beer in this wonderful place. Surrounded by jungle, green, humming birds and a beautiful river that runs through the whole place giving it a calming meditation sound effect. A few beers at the bar that was cut out of one single gigantic tree later and me and my sister decide to stay here for a couple of days. Perfect atmosphere to get creative. 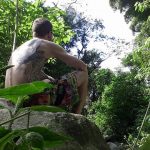 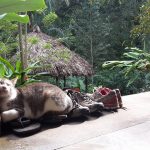 After two weeks I accompany my sister back to Medellin from where her flight went back to Germany. Her 4 weeks in Colombia were over and she needed to go home to start a new work.
After we said goodbye at the airport I return to the hostel. The sheets of her dorm-bed were still untidy and so I laid down for a couple of more hours. A little depressed about the fact that finally one thing I worked on the last couple of months came true:
Loneliness.

One week I staid in Medellin with good and bad experiences. I was able to get connected to a little number of nice people before I left back to Minca.
I had work to do because while I was drawing and writing in the middle of the peace an quiet of the jungle we came up with an idea how I may be able to help this wonderful place by designing new signs for it.
The purpose was to advertise this wonderful atmosphere to the travelers that are hiking past the place trying to get to one of the nice waterfalls around this area.
To get them in to have a beer. Enjoy lunch or even stay for a night in the tent or one of the private rooms.

“Everything happens for a reason” – an often used quote but nevertheless meaningful started to grow a seed that was planted in my life 3 years ago.
Sleepless nights of writing and drawing. Utilities that I bought especially through the last couple of months. A tombstone that I wrote on and that gave me a lot of confidence.
The Calligraphy nibs that I used to paint all the ornaments that suddenly built the base of me borders.
To see a graffiti develop in front of your eyes layer after layer. The time in the tattoo studio.
Everywhere in my past I found fragments and experiences that I suddenly was able to use step by step just by having a calm full environment and a healthy mental distance to my old life. 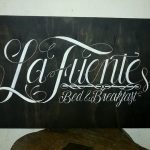 The first sign was still influenced a lot in colour and style by the owners but while I did that my confidence grew and so I decided to paint the second and bigger sign just the way I wanted to.
The final result was the biggest and in my opinion most beautiful piece of calligraphy artwork that I ever was able to do.
Time: more than 40 hours including freehand sketching all of it on the board
Size: About 2m x 1,5m 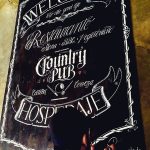 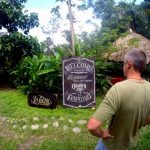 6 weeks after I came to this place for the first time I sat down with Duncan at the bar
6 weeks in which he also talked to my sister about no one knowing what is going on in my head at the moment. That he misses my laughter.
6 weeks of lonesome creativity, peace and quiet, meditation, loads of water, good and healthy food
6 weeks and a short sentence is spoken that stands for the importance of this place and time to me:
“It’s good to have you back, brother!”